Some build apps for fun while others for profit. Let’s face it, this is a business and a highly lucrative one. An estimated 1 billion smart phones were sold in 2015.The coming years have forecasted further growth in the smartphone and tablet markets. This will contribute to an increase of app users which in turn will generate more revenue for the market.

As per, ABI Research’s “Mobile Applications Research Service” report of 2012, the total revenue of the app industry will grow from $8.5 billion in 2011 to $46 billion in 2016. That is a huge number and therefore, app developers need to look at ways to tap the resource for maximization of their revenue.

A sure-shot way of earning through the app is by developing a paid app. However, with the cut-throat competition in the app market, this is a risky proposition. But, if you have a unique idea that has the potential to capture the fancy of the users, go for it. App users do go for paid app for exclusive staff, but the numbers are marginal and decreasing in numbers. Most researches show a steady rise in the popularity of free apps over paid apps. Refer to the picture below for better understanding. 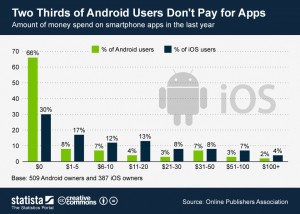 So, how do you earn money through your free app? App developers need to recoup the expenses of developing the app and then look for ways to generate profit out of it. Therefore, to make the most of this lucrative industry it is important to have a proper understanding of the market.

As a matter of fact, some of the top grossing apps are free to download. Now that is counterintuitive, right? Well, not really, these websites are just implementing smarter app mobilization strategies. With a well-chalked out, monetization strategy, an app available for free download can incur high profits. So, how does one determine a successful monetization strategy for your app?

Things to consider for a good monetization strategy

The in-app advertisement is similar to the traditional advertising models. It comes in a myriad of sizes, placement, and positions in the mobile app. Advertising payments for apps are done depending on different determinants like impressions, click-through, ad formats among other factors.

The concept of virtual currency is said to be a highly profitable revenue generating model. This feature is often available in games like real football or temple run, where the app user can buy gears or goodies to unlock the next level by buying virtual currency. However, the model is a tough one to formulate as this model works well only in a highly engaging game.

Though this seemed like a good revenue model, but the stats tell otherwise. The lack of acceptance for this revenue model can be contributed to the fact that managing and creating subscriptions is a tiring process for both user and developer.

A stable source of App monetization

In – App Advertising is fast establishing as the most sustainable and reliable source to generate revenue through a free app. To maximize the revenue, app developers often suggest different solutions and strategies. However, to measure the success rate of such strategies, app developers need to monitor the performance of different metrics which later act as KPIs. These metrics are important to define how much revenue can be expected from an app .

Let’s look at the different concepts that are crucial in designing innovative in-app advertising strategies.

The term eCPM means Effective cost per mille, that is the revenue an app developing firm will make in every thousand impressions. Impression meaning the number of times the page has been loaded. Below is the formula to calculate eCPM.

CTR stands for Click-through rate. The ratio between the total number of clicks on an ad to the number of people who saw the ad is CTR. For high CTR relevancy of the campaign and strategy for placement are important contributors. Therefore, to achieve a high CTR a developer should pass important information about the users to the Ad Network . This helps to plan the ad campaign better and maximize the revenues through the in-app Ad.

As discussed, in-app advertisements are an important source of revenue especially for any Mobile Application Development firm. However, smartphone users are sophisticated customers who would not tolerate apps which focus only on in-app purchases or advertisements. Therefore, it’s important that free apps weave advertisements in a way that it looks as normal as possible.

So how to incorporate ads so that it serves its purpose, without being sore to the user’s eyes? The 2014 study by Medialets (picture given below) illustrated that specific banner sizes and their position on the app play an important role in the conversion rate of an ad.

It shows that ads with 300×250 or 320×50 pixels placed either at the lower half or bottom of the screen or as a slice in the center of the screen are seen to generate a positive response. Moreover, there are the interstitial ads which are full-screen static or video ads that are common in different apps especially in gaming ads. However, these ads have to be posted strategically, like between levels of a game or else they can be obtrusive.

Then there are sponsored promotional content or videos that seem like part of the app. Such ads are known as Native ads and is a common in-app advertising technique used in apps like Twitter or Facebook. The best way for effective in-app purchases are those that are in tune with the content and context of the app, and add value to the user experience.

There are a number of advertising formats developed by mobile app developers to enhance advertiser’s value and generate revenue. To amplify the monetization process of an app, developers need to analyze the effect of different ad formats and their placement in an app. The image below illustrates the different formats of ads that are used in the in-app advertisement.

Sudeep Banerjee is the Founder and President of Mobixed, the leading mobile apps development company of California. A visionary entrepreneur, Sudeep's expertise lies in various fields including web development, digital marketing and app development. He believes that apps would act as powerful vehicles to drive sales for businesses in the near future.